A downloadable comic for Windows, macOS, Linux, and Android

THIS FEATURE PRESENTATION IS RATED R FOR VIOLENCE AND SEXUAL CONTENT. IF UNDER 18 PLEASE GET A PARENT'S PERMISSION BEFORE GOING ONLINE.

HELLO, ALMA is a 15 page comic that comes with a soundtrack. The PDF and individual pages are included with EVERY download.

DO I HAVE TO LISTEN TO THE OST WHILE I READ THE COMIC?
No, I do not need nor expect you to sit there and stare at a single page for three minutes. However, I tried doing this myself and had a fun time.

THIS IS A COMIC BOOK.
Yes.

AND ALSO A SOUNDTRACK.
Yes that is also true.

WHAT FILETYPES?
PNG images, a PDF for good measure, and MP3s for the soundtrack. All compressed conveniently into a .zip file.

CAN I PREVIEW THE AUDIO/GET ALTERNATE FILETYPES?

Yes! Hello, Alma is also available over at Bandcamp.

In order to download this comic you must purchase it at or above the minimum price of $10 USD. You will get access to the following files:

I can't believe no one else has commented on this.

I could write an essay on this thing.

My personal interpretation was the feeling of someone becoming a better version of themselves, which comes with obvious benefits, but at the same time, the death of that "true" self with all its flaws which feels so cruel to that flawed self......it wasn't as likeable or reliable or nice or soft, but it wanted love too. Doesn't it deserve to be loved despite all its flaws, instead of just being more likeable and easier to enjoy?

Damn. Really excellent. I stared at the last page through the entire song.

Oh man, this is a really cool and empathetic reading. It brings me back to what I felt going through the comic.

I felt, feel a lot of kinship with Alma's alpha self here- having a lot of creative ambitions (which Barroo's output kind of mirrors in some ways, come to think of it!), while also not having gained enough facility in self-propulsion that I can say I'm on the path to actualizing them (not yet at least, to put a hopeful spin on it!), despite having held onto them for a really long time. Being exhausted routinely, being less confident than would be ideal at best in personal relationships and socializing, dealing with the insecurities that naturally arise from conditions like that and from the seeming impossibility of getting from zero to nonzero at it all by engaging in self-indulgent avoidant behaviors that ultimately end up unfulfilling, et cetera, most or at least lots of people know how it goes by now- boy, I didn't need much convincing to get on board with alpha Alma. Who the fuck is this bitch and what does she think she's doing while we're grinding out an existence?! She's gonna let the world know how bogus we are and/or steal everything we've ever wanted! Get her ass!!

And then, like. Realizing. Oh.  Maybe it might be preferable if some parts of me died so that other parts could be granted life, actually. And thinking, isn't it actually kinda messed up to see some self-actualization going on and, effectively, jump to "Fuck You"? That's pretty far from actualizing my ideal self, at any rate.

...but at the same time feeling, like. Does my or anybody's whole ass ego as it have to die to make enough progress? It kinda feels that way sometimes, and I imagine a lot of people can probably relate.  That's scary, though!

Anyway, to wrap it up. I'm glad to have it confirmed I wasn't the only one who read this and felt for, even if not ultimately Side with, alpha Alma. The whole comic gives some great rep of how messy sorting ourselves out inside can feel.

Aside: coming in late as fuck on this but Barroo, you're making huge strides in multiple mediums and it makes me so friggin happy to witness. I'm psyched to be following your work! 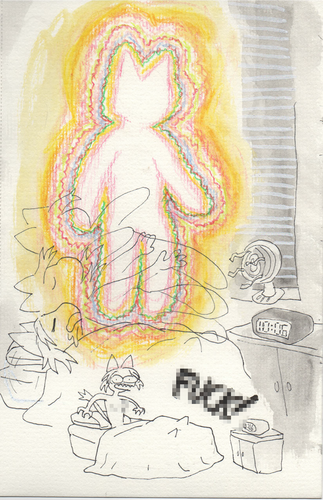 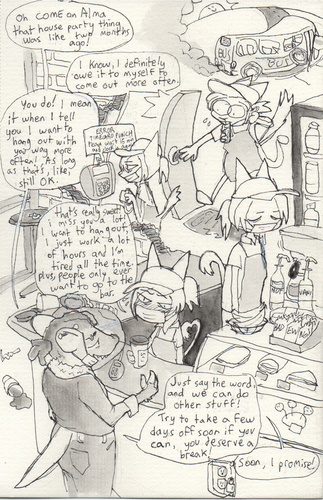 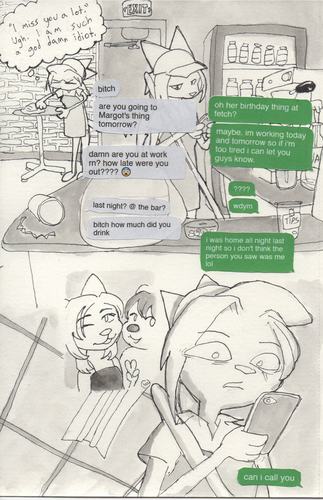 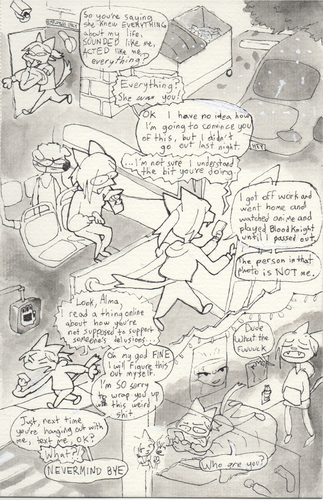